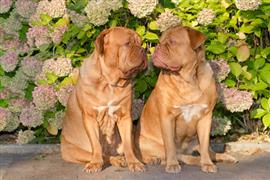 Top Full Group Images User
With origins in France dating back to the 14th century in the Bordeaux region, the Dogue De Bordeaux, or French Mastiff, is often given a French name. Adele, Quentin, and Adrien are a few popular French names found among the breed. The Dogue De Bordeaux was historically used to help protect castles from invaders. Many original dog names can be taken from the names of various castles throughout the world. Monte (after Castel del Monte in Italy), Ashby (after Ashby Castle in the United Kingdom), Durham (after Durham Castle in England), and Windsor (after Windsor Castle in the United Kingdom) are just a small selection of castle based names. The Dogue De Bordeaux is known for its fawn colored coat ranging in shades from a reddish to a more brownish appearance. When it comes to brown and red color-based dog names, the breed gets the best of both worlds. On the red side of the fence, popular choices include Copper, Russet, and Dahlia. On the brown side, names like Bear, Mocha, and Tanner are favorites.

There are currently no groups for Dogue De Bordeaux Names. Help get one started by making your group recommendation below!

Some of our pages will contain a group. A group is a slightly more specific collection than the main topic of the page. For a group, we will include a separated table of names and corresponding descriptions. An example of a group for Red Dog Names would be 'Dog Names Inspired by Red Wines'. If you have any group ideas for the Dogue De Bordeaux Names page, we would love to hear them. Use the form below to submit your ideas.
Group Idea: Submitted!

Other visitors to our site submitted the following Dogue De Bordeaux Names photos:

Other visitors to our Dogue De Bordeaux Names page recommend the following names:

There are currently no name recommendations for this page. This is your opportunity to be the first! Make your recommendation below.

We would like to take this time to thank all of our visitors that make DogNamed.com the best dog naming resource on the web. Our site would not be where it is today without your suggestions, ratings, and photo submissions. So pat yourselves on the back for a job well done and keep up the good work! If you have any comments, suggestions, or ideas for the Dogue De Bordeaux Names page or any part of our site, don't hesitate to drop us a line on our Contact Page. Thank you! -The DogNamed Team